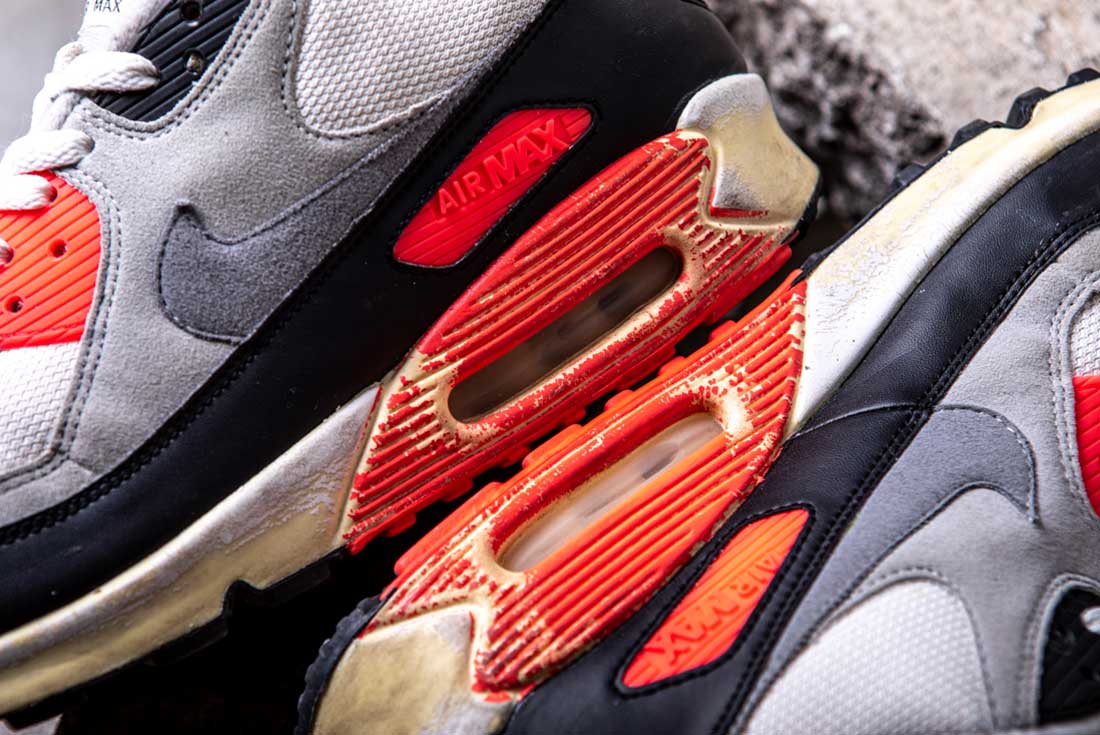 The Nike Air Max 90 was actually originally known as the Air Max III, or just ‘Air Max’ on the box label. When creating the AM90, legendary Nike designer Tinker Hatfield had the somewhat unenviable task of improving upon his monumental 1987 design – now known as the Air Max 1 – and 1989's Air Max Light. And it was these two iconic silhouettes that seemed to inform much of the design language of the Air Max 90 when it first appeared in 1990. In particular, you can see elements of the Light in the variable-width forefoot eyelets, microfibre and mesh upper, and lightly padded nylon tongue. Ultimately, the AM90 could be seen as a functional and aesthetic improvement upon its well-known predecessors. 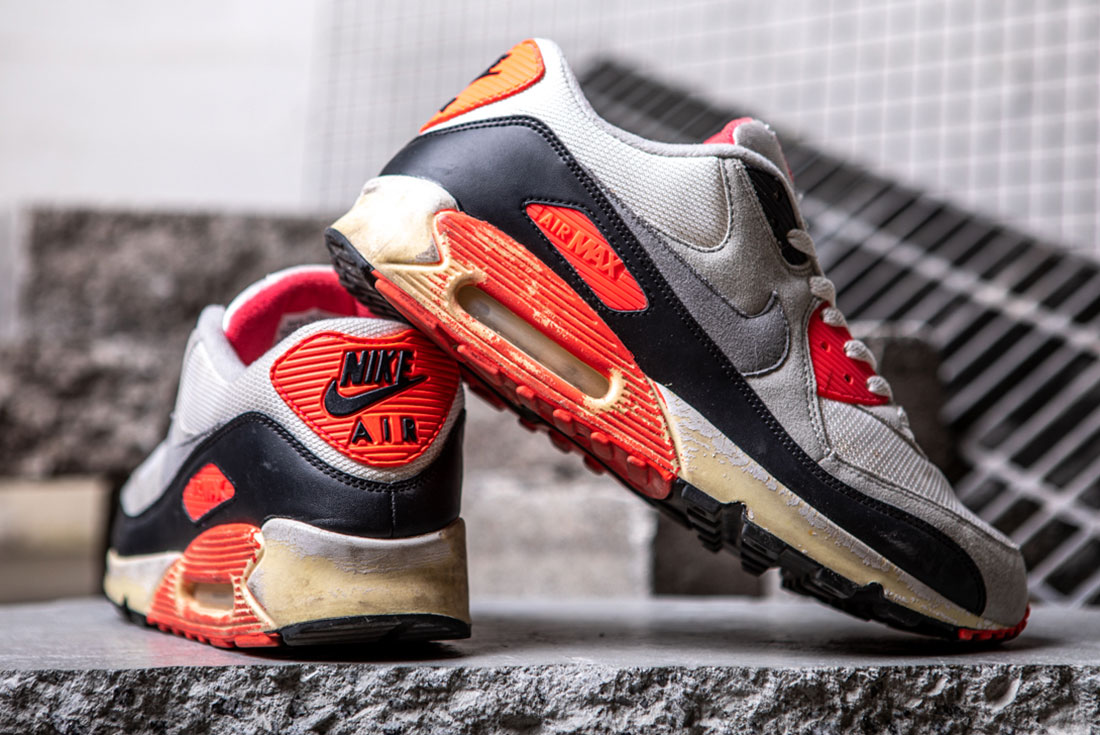 Spend enough time on the Internet and you may see photos of – gasp – people actually running in Air Max 90s. One such example is legendary Australian distance runner Steve Moneghetti, who acted as an early evangelist of the AM90. Moneghetti was the literal poster boy for the shoe, plastered on walls all over the place sporting the ‘Spruce’ edition. Fun fact: Moneghetti still holds the course record for annual Sydney fun run City2Surf, set in 1991. Could he have been wearing Air Max 90s? 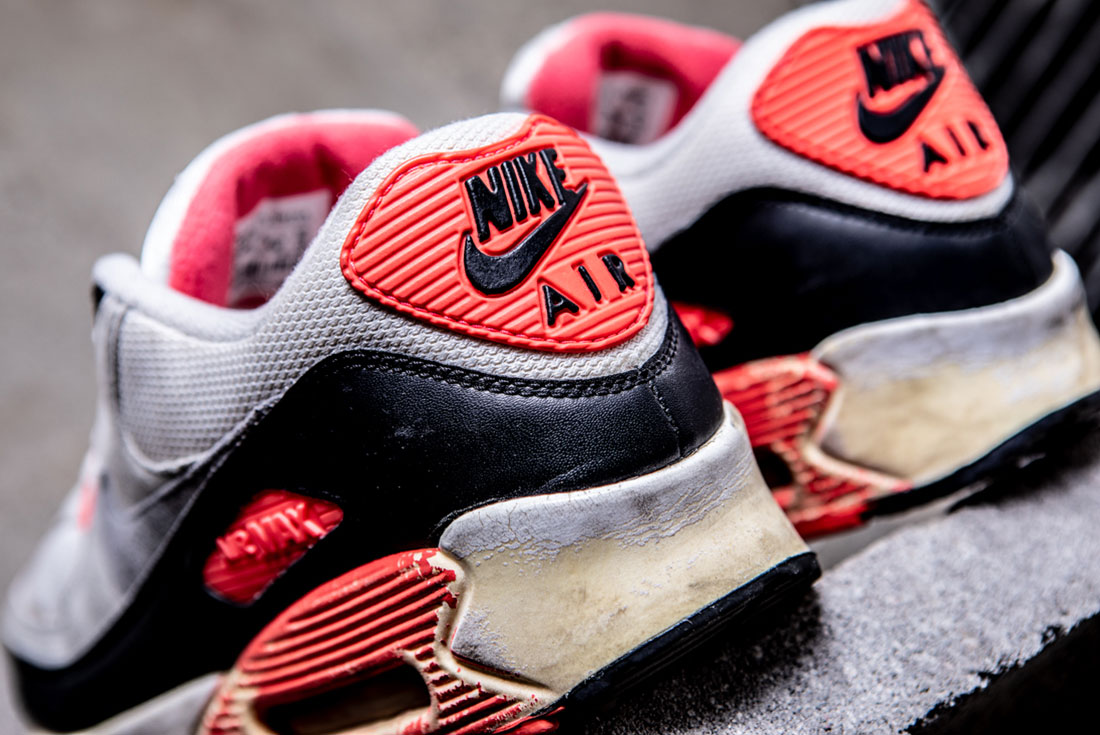 To remain within the early years of the AM90, the new decade ushered in an accompanying spectrum of highlighter hues, laying the groundwork for the neon and fluorescent colourways of later flagship runners. Compared to other Air Max models, the AM90's panelling gives much more scope for unique colour and material choices. When executed properly, the result is balanced colourways and instant classics that are highly desirable. 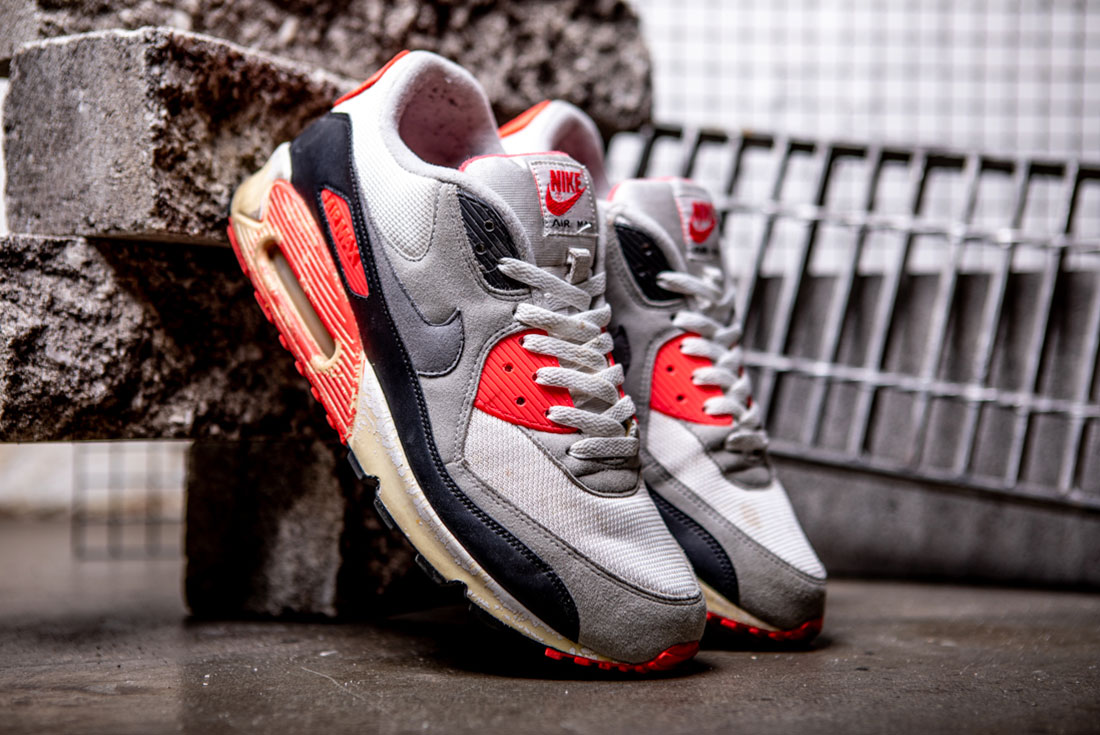 Before the sneaker-centric society that we live in today existed, the AM90 was the sneaker for everybody. It was simply a really good running shoe that originally resonated with the performance crowd, before becoming niche at the turn of the new millennium. 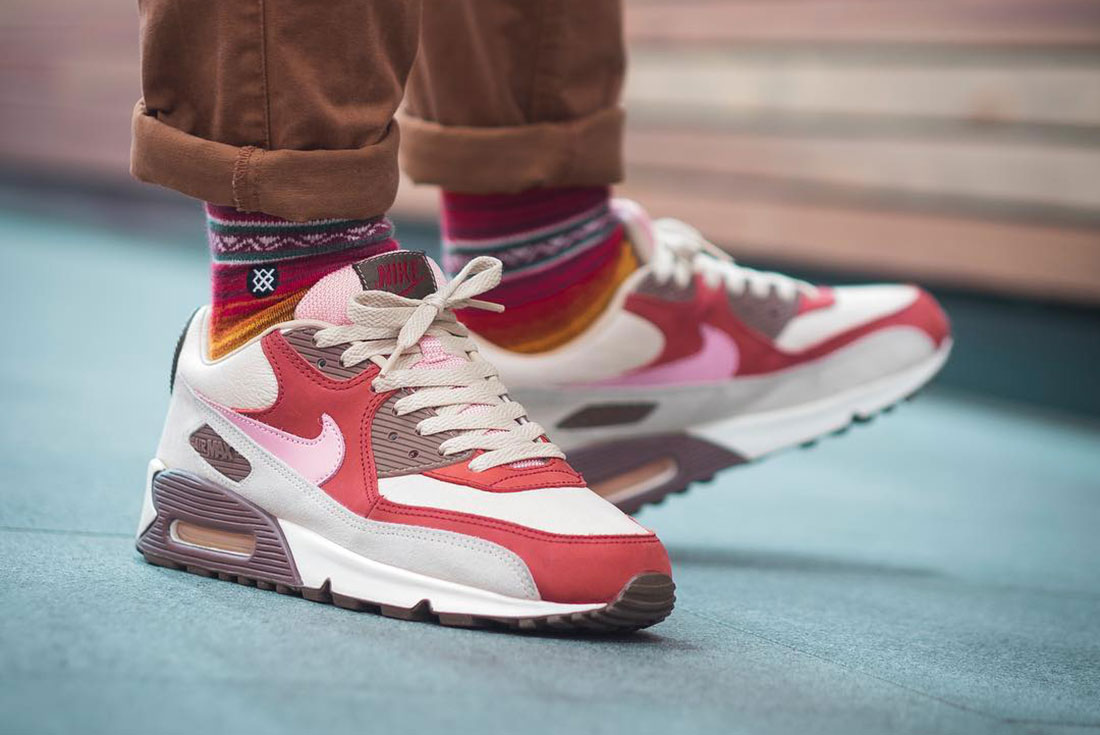 This takes us to the early 2000s, a period many consider to be the last golden era for sneakers. Tackling one contentious statement at a time, the Air Max 90 returned in a flurry of new colourways in addition to its original ‘Infrared’ (trainerspotters will rightly say it was actually ‘Hyvent Orange’ or ‘Radiant Red’). Fans breathed a collective sigh of relief as their OG 1990 pairs were on their last legs, leaving a trail of polyurethane dust behind each gingerly-taken step. 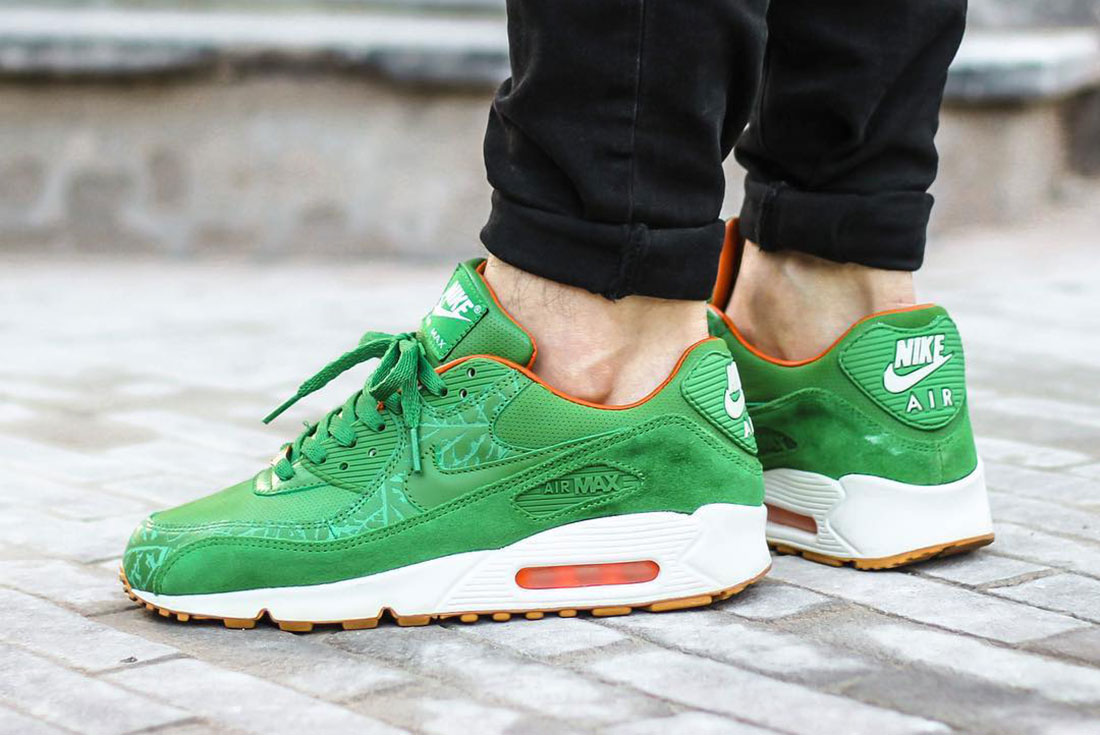 Stocking up on ‘Infrareds’ has always been something in the ‘woulda, coulda, shoulda’ basket, but thankfully Nike's been fairly generous with the reissue cycle: it returned again in 2002 (albeit as ‘MX Orange’), 2003 (the first official ‘Infrared’ reference), 2005's History Of Air, 2008, 2010, a pre-vintaged 2013, and most recently in 2015. Post HOA, there have also been some interesting material and hybrid switch-ups. While the Swoosh have not officially announced the ‘Infrared’s'return for its 30th anniversary in 2020, it'd be fairly safe to hedge your bets on seeing it on shelves again next year. 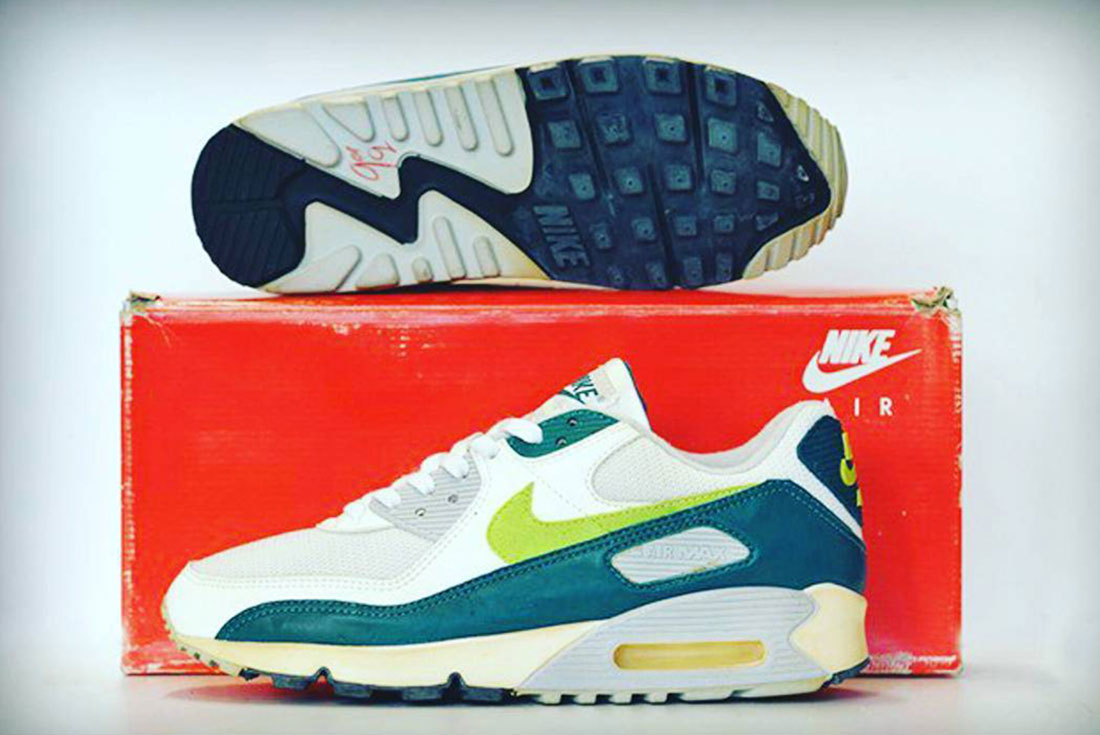 And what about colourways other than ‘Infrared’? To Nike's credit, their love of the pinky-orangey shade is great, but it's almost to a fault. The 1990 release was accompanied by the sometimes-seen ‘Laser Blue’ and women's ‘Concord’, but it wouldn't be amiss if the Swoosh decide to also bring back the previously UK-only ‘Spruce’ and ‘Sunburst’ editions. And we haven't even gotten started on the dozens, if not hundreds, of retro colourways that Nike can put on the AM90 once again.

So, where does this leave the Air Max 90 today? It's as popular as ever: it feels like it's been present in every single Nike footwear season for at least the past 10 years. It's manufactured in every single size range, from toddlers all the way up to men's 18 US, so nobody misses out. And the AM90 is still a preferred silhouette for collaborations and customs, but its real strength lies in its universal appeal. Everyone from John Mayer to Jay-Z and in-between has been spotted rocking AM90s over the years. 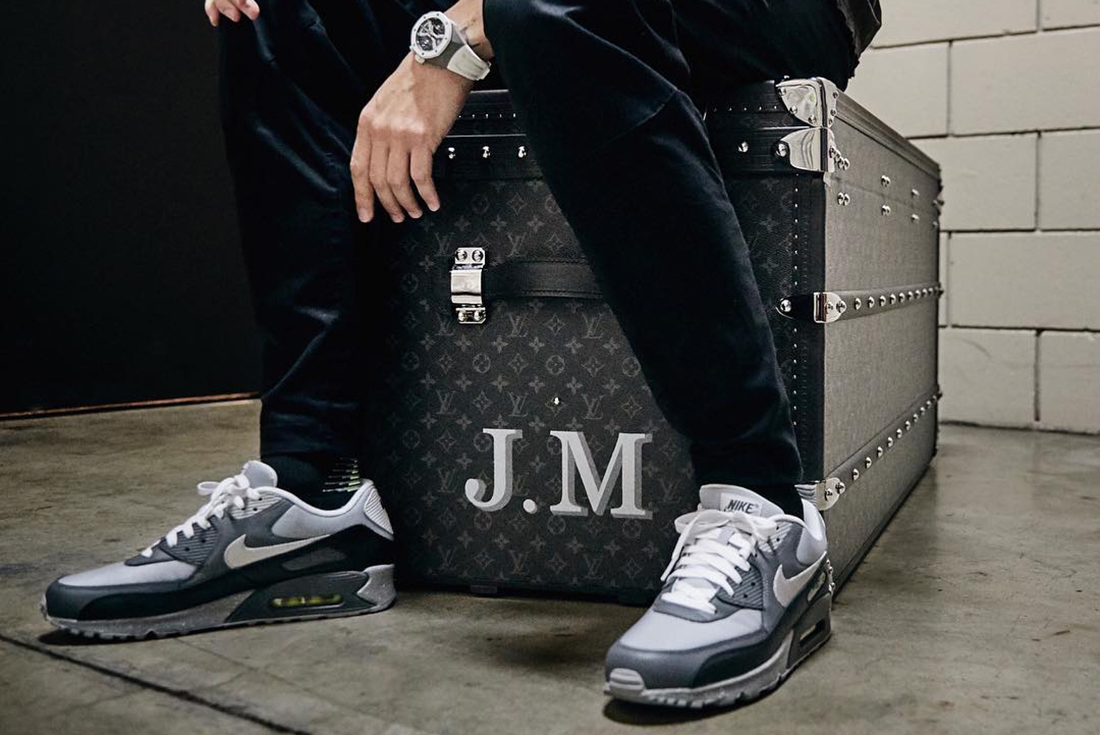 The Nike Air Max 90 remains an important sneaker in Nike's wider lore. Still a comfortable sneaker for its vintage, the fact that it celebrates its 30th birthday next year – and is still in production – is a testament to its timeless and enduring design. In 2020, you'll have no excuses for not owning a pair.